This short 5-song set is high up on quite a few favorites lists.  The video just has to be seen to be believed (Barney throws a hissy fit throughout, in much-too-short shorts, for starters), but the pure aggression in the band is brought to fore on this.  This version of "Sooner Than You Think" is close to, if not absolute, my favorite performance of this song. 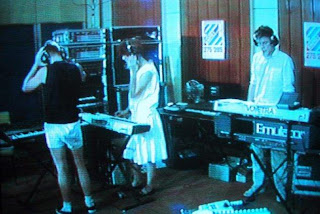 Legend has it that they were caught in a massive traffic jam betwixt Cornwall and London, so were late for the set and had no chance to do a proper soundcheck, and basically had to wing it that afternoon.  I really have no other explanation for the band choosing to air "In A Lonely Place" ("Faster!") - as majestic as it is - to all of the UK on a presumably pleasant late summer Saturday afternoon.  As Barney puts it after the song, it's "an atmospheric song in an unatmospheric place".

I am convinced that the master cassette for this source was recorded by someone who had somehow found a way to hard-wire an RCA cable into the airwaves.  There was little to no FM noise, it was really just a beautiful source and is leaps and bounds the best version I've heard of this (and as usual, I've heard lots).

Techy notes:  The "diginoise" in a few spots in "Age Of Consent" and the end of "Temptation" - for both songs, on the vocals only - appears to be Barney overloading the poor Beeb's console.  There were a few other glitches in "Age Of Consent" that were more than likely FM noise, which I've fixed.  It didn't help that shortly into "AOC" Barney ripped off the pop screen from the vocal mic.  And while not a "tech" note, had the Beeb's censors been heads up, there are a few lines here and there that shouldn't have made it through...

Someone with the skills for the video editing side of the biz needs to match this audio up with the best circulating video copy of this.  I'd pay for the result!  Not really...

Please to enjoy!
Posted by Analog Loyalist at 10:36 PM