At long last I'm starting to fix up and free a stash of gigs - which first saw the light (heh) in 2004 on the long-defunct Sharing The Groove, but were essentially untouched beyond basic cleanup - that really show how brilliant New Order were in their prime in the mid-'80s.

The quick-and-dirty background:  Whilst cleaning house, a set of master New Order soundboard tapes (various mid-80s live gigs, some rehearsals, and a DAT or two from the band's 1989 US tour) was found by Hooky under the floorboards at his studio Suite 16 in Rochdale, England.  At some point, these tapes ended up in Hooky's trash as he thought they were shite, apparently.  After a drunken night at Casa de Hooky, a musician friend of the bearded bass player, who was in his employ for a duration in the early 90s, rescued the tapes from the rubbish bin.  Ultimately the tapes ended up being auctioned to a well-known New Order internet site proprietor in Florida, a fellow who is not commonly known for sharing the wealth.  In the interim, ATR (sometimes called Stash) obtained digital transfers of these tapes before they were shipped off to the Sunshine State.  ATR then shared them amongst the New Order cognoscenti, and then in 2004 we fed them to the world via Sharing The Groove.

All these gigs had their various problems as-received from the source in between Hooky and us, the least of which were sector boundary errors (which means, if burned as-is to CD, there are audible "pops" in between tracks) and all off-pitch by varying degrees.  Some were extremely muddy, and others were far too bright.  None of them were just right, but my aim is to make them so.

(The New Order "stash" gigs that were on Sharing The Groove, and various other torrent sites and blogs from 2004 onward, are all from those original 2004 releases and have not been formally mastered since, until now.) 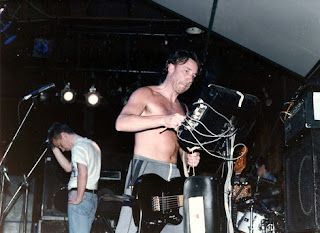 This is, possibly, the worst New Order gig ever.

The entire gig is just a sloppy, poorly-performed mess.  It's perhaps living proof that, in the day, a New Order gig was either going to be one of the best ever gigs you ever saw, or the worst.  Which is why - while not an everyday listen for me - I love this tape.

To add insult to injury, we don't actually know what this gig is!  The stash box o' tapes labeled this as "OZ/NZ85" both on the manifest, and the tape itself.  For a long time New Order gig sleuths believed it was actually from the Fox Theater, Atlanta GA 11 Aug 1985, but further close analysis has caused a significant rethink of this.  What little of the audience you can make out doesn't sound American, or even American South.  The punter yelling for the Joy Division song "Transmission" doesn't prounounce the "Trans" bit like an American (think "Treans" but little emphasis on the "e"); rather, it sounds English or Antipodean ("Trahns").  Same with the punter yelling for "In A Lonely Place".

Here's the analysis from a detective, posted in our humble site host's writeup of this, which he has defaulted to listing under the 11 Aug 85 entry:

"I've been doing some more detective work...... I remembered seeing a poster on eBay last year for Perth Canterbury Court 15/5/85, but hadn't realised that this was an unknown gig until looking at your gigography. I know we hadn't got a recording, or so we thought....

I've done a lot of listening to the horror show that we had previously tentatively identified as Atlanta Fox Theater 11/8/85, but I am now starting to come over heavily to the idea that this is indeed the Perth 15/5/85 show.

- The CD I got had OZ/NZ85 written on it - this is how it was labelled when it went to David Sultan in the first place as part of that box.
- The performance is very much one of a band who haven't been rehearsing, rather than one mid-tour, as would have been the case for Atlanta.
- The setlist fits in better with what they were doing in Hong Kong/Japan/ Australia than it does the US - many overlaps with the New Orleans 12/8/85 show but hardly any with the Melbourne 17/5/85 show, which fits in with their rotation policy.
- "As It Is When It Was" is better formed than the Japanese versions, but not as advanced as the US versions, and the lyrics are the same as Brisbane five days later.
- The voice that calls out for "In A Lonely Place" when Bernard picks up his melodica before "Hurt" is not an American one....sounds more Antipodean to me.

Still in stitches over some of the performances that night - "Subculture" on the wrong bass string, shoddy "Sunrise" guitar work, an apocalyptic "Chosen Time", Bernard's failure to read the setlist, Gillian striking again on "STYT"..... quite possibly the worst ever performance I would think!"


So, I'm going with the newthink and calling it Perth 15 May 1985.  What pins it for me is that what Barney was meaning to introduce as "a very new song" - "As It Is When It Was" - was indeed a very new song for May 1985, having just entered the setlists earlier in the month in Japan.  By the time of the American tour in late summer 1985, it had been played a fair bit and would no longer have been a "very new song".

My favorite part of this gig is the entirety of "Death Rattle".  Gillian performs the whole song in the wrong key, causing Barney to give up all pretense of performance and just have fun with it.

I really like the "Sunrise" intro, for whatever reason.  "Temptation" has a somewhat unique opening that I also dig quite a bit; it's a shame that we only get about 5+ minutes of the song until it's faded out due to it being on the tape flip spot.

A technical note:  Until about one minute into "Age Of Consent" the levels are in spots overloaded, causing significant distortion at times in the first three (and a half) songs.  I think it's the tape and not the transfer; the overall level of the transfer didn't change throughout but the worst distortion magically clears up when presumably Oz finally pulled back on the levels mid-song (there are still lesser distorted bits throughout however).

Please to enjoy!
Posted by Analog Loyalist at 12:49 PM